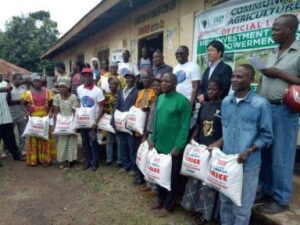 Farmers and partners during the launch in Ganta.,

The Rice Investment Scheme for Empowerment (RISE), was recently launched in Ganta, Nimba County at a well-organized program attended by officials from the Ministry of Agriculture (MOA), international partners, and small holder farmers.

Although CHAP Executive Director, Robert Bimba informed participants that RISE empowers farmers with necessary farming implements and skills, each of the farmers is encouraged to contribute a minimum of US$1 to support the initiative.
Bimba said within the next few years, farmers in the beneficiary counties of the project, including Nimba , Lofa, Grand Gedeh, Montserrado, Bomi, Bong, Margibi and Grand Cape Mount, are expected to increase rice production to improve their living conditions.

According to him, the program is supporting 5,000 rice farmers in the targeted counties by growing rice using the “System of Rice Intensification” (SRI) method to improve yields.

The SRI is a method aimed at increasing the yield of rice produced in farming. It is a low water, labor-intensive, method that uses younger seedlings (young plants) singly spaced and typically hand weeded with special tools. This improved technology is currently being practiced in several West African countries, including Liberia, with the goal to increase rice production to improve food security in the region.

To this, CHAP is currently working to support rice farmers in developing 1,000 hectares of land to produce 40,000 metric tons of milled rice per cropping season.

“We are  encouraging farmers to produce more rice to promote the “Love Liberian Rice Campaign.”  We distribute improved variety of rice seed to farmers for planting. This strategy is greatly yielding results,” Mr. Bimba explained.

He added, “we will need timely support for farmers to sustain the program as we are working in the areas of production, processing, preservation, and promotion on marketing as well as transporting seed rice to the rest of the counties,” he said.

Fagans also spoke of the ministry’s commitment to work with CHAP to support the farmers.

Meanwhile, the Minister of Finance Development and planning, Samuel Tweah, has said that the government will support CHAP to meet its objectives.

Tweah’s comment was contained in his welcome remarks at a recent meeting with CHAP Executive Director when he paid him a courtesy visit at his office in Monrovia.

NaFAA locks in discussions with stakeholders to end...

We have not approved the launch of any...

House of Rep. concurs with Senate for use...

Government to Establish a Database to Enhance Support...