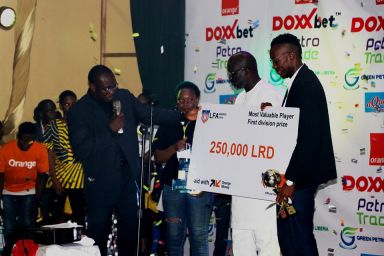 The LISCR striker was named the Most Valuable Player of the 2019 Football League Season at an award gala held at the Monrovia City Hall.

Christopher Jackson was voted to the award by local coaches, club captains, journalists and members of the public ahead of his two opponents.

Besides the MVP title, Christopher Jackson also sheared the prize for the highest goal scorer with Varney Dukuly of Nimba United after the two finished the season leveled on 17 goals.

He received L$250,000, a Techno Phone and USB stick along with the car for winning the MVP award.

Soccer Legend and President of Liberia, George Weah, announced the winner of the prestigious award, and called on stage his former Liberia Lone Star team-mate James Salinsa Debbah to present the awards to Christopher Jackson.

Mark pocketed L$450,000 and Angeline received L$350,000 along with a Techno phone and USB stick respectively.

Fifa-badged referee Sylvina Garnett was crowned for the female division and
received L$225,000, a USB stick and Techno phone.