MONROVIA, LIBERIA- President George Weah has declared open a state-of-the-art ‘Unification Theater of Arts’ and recording studio facility with a capacity 162 in the country to ease the burdens of Liberian Artists. 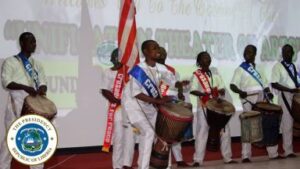 The Unification Theater of Arts is especially was designed to provide modern, high-tech facilities that give unfettered leverage to Liberians in the theatrical business.

“It is now my pleasure to welcome you and to dedicate and officially declare the Unification Theatre of Arts open and ready for business.” President    Weah said.

President Weah  performed the dedication ceremony  of the Unification Theater of Arts located in the vicinity of the newly established Forky Klon Family Fellowship in Re-Hab Community, Paynesville on  Sunday, April 14, 2019.

The occasion was witnessed by House Speaker Bhofal Chambers, Senate Pro Tempore Albert Chie, a host of other government officials, representatives from the Liberian music and movie groups and members the Liberian track-and-field team that recently won medals in the 2019 Special Olympics held in the United Arab Emirates.

The Unification Theatre of Arts during its trial of facilities, entertained the guests including filming on its gigantic screen the movie, ‘Snorti: The Chief Daughter” done under the directorship of Liberian International Movie Star Frank Artus. The film cast several Liberian stars whose roles and actions kept the audience spellbound and choked by continued laughter from start to end.

With solid experience in the music industry, President Weah then Standard Bearer of the Coalition for Democratic Change (CDC) promised struggling Liberian musicians and movie actors that he would build the country’s first modern recording studio and theater.

The Liberian leader, in a recent interactive session with diaspora Liberians, reiterated his determination to build the Unification Theatre of Arts that would be at the disposal of all Liberians interested in music and movie as to lessen their burdens of travelling abroad to record and produce their artworks.