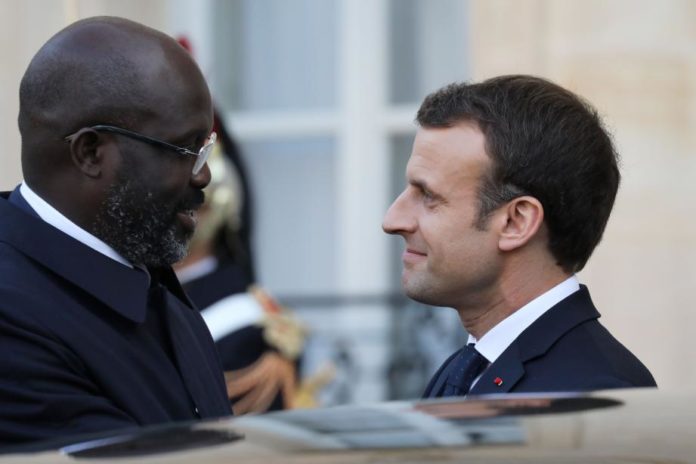 The meeting between the two leaders will take place on the back of a dinner at the l’Elysee Palace in Paris. The dinner is being tendered by the French Leader for all invited Heads of State and Government to the forum.

The meeting with the Mr. Emmanuel Macron is aimed at strengthening bilateral ties between Liberia and France, as well as soliciting and attracting French investments in Liberia. The Liberian Leader hopes to solicit youth empowerment initiatives including scholarships for Liberians.

Furthermore, President Weah will hold multilateral discussions with other Heads of State and Governments on the margins of the Forum.

Likewise, last year, President Weah met with the President of the United States of America Donald Trump, Israeli Prime Minister Benjamin Netanyahu and President Vladimir Putin of Russia among others.

Members of Liberia’s delegation including Ministers will also participate in the UNESCO General Assembly taking place concurrently in Paris.

The Paris Peace Forum is aimed at encouraging international cooperation and collective action for a peaceful world; presentations, discussions and progress on innovative, real-world solutions. It takes into consideration that enhancing, rethinking or creating new rules, standards and best practices promote good governance and better world for all.

The Paris Peace Forum will highlight that in a deteriorated international environment it is still possible to advance governance solutions and launch new initiatives to tackle the global challenges of our world though with entrepreneurial ideas and contributions from all actors—including states, international organization, and civil society.

The 2019 Paris Peace Forum received more than 700 applications from project leaders in 115 countries seeking to expand their impact by participating in the 2019 Forum event.

The one hundred projects chosen by the Selection Committee reflect a truly global perspective, representing all regions of the world. This year, nearly half (48%) are already implementing their projects across several continents or globally.

All Set For Nationwide Food Distribution