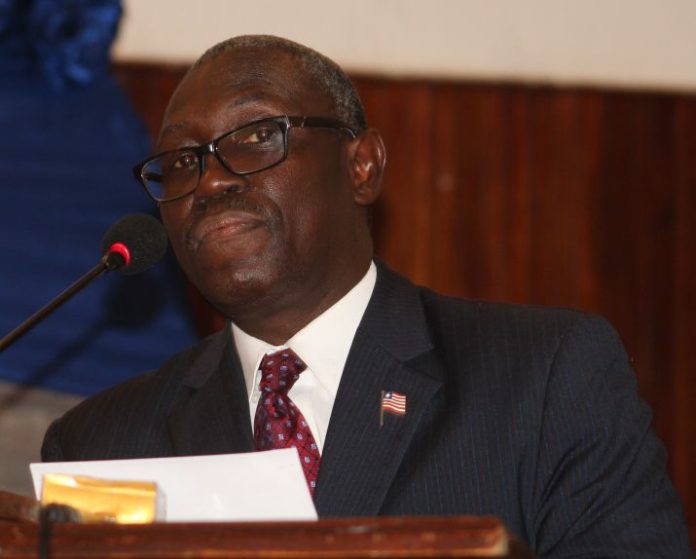 GANTA, NIMBA COUNTY, LIBERIA- Protesting redundant workers of Arcelormital-Liberia has agreed to cut off their actions against the company.

The decision was reached following the intervention of Internal Affairs Minister Varney A. Sirleaf Thursday in Ganta, Nimba County.

An Internal Affairs Ministry’s press release said the meeting called by Minister Sirleaf was attended by the leadership of the protesters, the management of Arcelormital, Nimba County Superintendent Dorr Cooper and others

Early Thursday, November 14th, protesters in Grand Bassa and Nimba Counties setup roadblocks on the train track used by the company to transport iron ore from the mountains in Nimba to the port of Buchanan, in demand of their benefits or reinstatement into workforce.

Mr. Kingston Nyandibo, head of the redundant Arcelor mital employees in a meeting said they and some of their family members embarked on the protest because all efforts aimed addressing their plights have proven fruitless.Mr. Nyandibo said that those affected include seven- hundred -sixty-nine (769) workers, categorized in three groups namely: 363 employees, 366 contractors and 40 others considered illegally dismissed.

According to the protesters’ leadership, their redundancy was effected in 2015 and 2016 due to drop in prices of iron ore on the international market, with an understanding that the company would recall them if prices rise.

“Instead, when prices improve beginning 2017, the company chose to hire a new batch of workers which was in total disregard to the redundancy clause”, said Mr. Joseph G. Kaye, spokesperson of the protesters.

Mr. Kaye said they have been pursuing the matter with the company since May, 2018.Meanwhile, Mr. Marcus S. Wleh, Head of Government Relations of Arcelormital, appealed to the protesters to grant a two-week period for the company to sort out the relevant documentations that will lead to finding permanent solution to the problem.

Honorable Sirleaf assured that he will work with the relevant government entities including Ministry of Labor and National Bureau of Concessions.Based on the Minister’s intervention, Mr. Nyandibo promised to immediately communicate with his colleagues as well as travel along the train track informing his colleagues to remain calm and abort all protests. The release concludes..