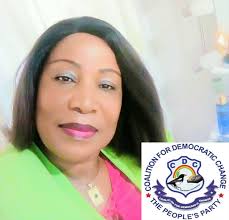 According to a release issued Tuesday, November 19, 2019, Minister Wolokolie was suspended from the party for alleged corruption, fraud and for running a fake loan scheme to tarnish the image of the party.

The CDC described the alleged action of Madame Jamama Wolokolie as grave, criminal, dangerous and unbecoming of a party member.

In May 2018, the Deputy Commerce Minister was suspended from her position by President George Weah for alleged insubordination to her immediate boss, but was later reinstated.

The release quotes the CDC National Executive Committee as saying it will not condone counter-progressive and unruly behavior of any member of the Party.

When contacted, Minister Jamama Wolokolie told ELBC that she is not aware of her suspension.

Madame Wolokolie described the news of her suspension from the party as a surprise, but declined to comment on whether she would challenge her suspension.