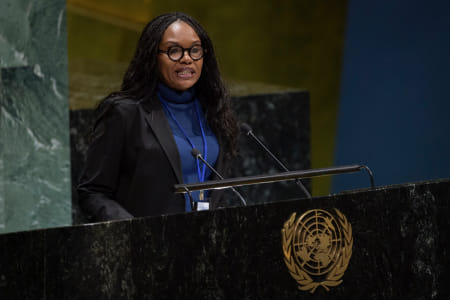 MONROVIA, LIBERIA-Deputy Gender Minister says Liberia has made significant strides in the implementation of the Convention on the Rights of the Child.

Deputy Minister Lydia Sherman said:” This has been done especially through the enactment of legislation and development of policies, and programs to address the rights and welfare of children.”

Minister Sherman disclosed that these initiatives by Liberia highlight children’s rights to survival, access to quality education, justice, health, and social protection, as well as other services that impact their growth and development.

Speaking Wednesday, November 20, 2019, at the UN Headquarters in New York, she recounted that in 2010, Liberia signed the Convention on the Rights of Persons Living with Disabilities to address   the needs of children, and in 2011, established the Education Reform Act.

According to a dispatch from New York, the Deputy Gender Minister said:” The Liberian Government has also revised the Domestic Relation Law, and is vigorously implementing the Decent Work Bill which prevents children from being subject to the worst forms of child labor.”

Meanwhile, on Wednesday, November 20, Liberia joined other Countries around the world to commemorate the 30th Anniversary of the Convention on the Rights of the Child (CRC), and World Children’s Day at the UN Headquarters in New York.