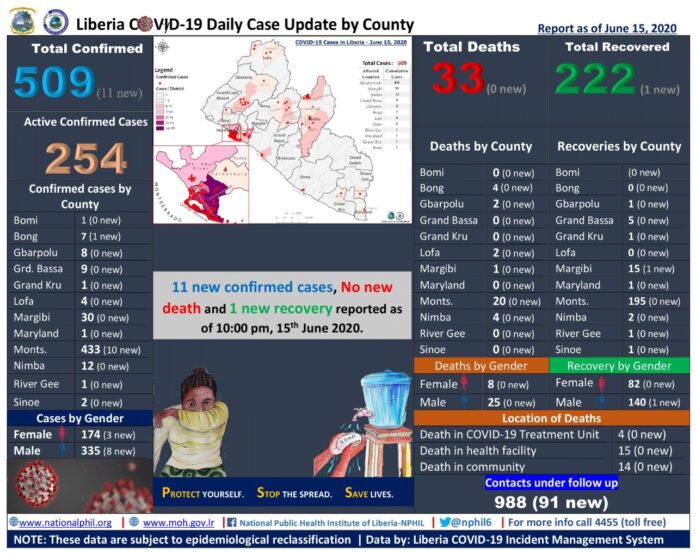 There has also been one new recovery, bringing the total of recoveries to two hundred and twenty –two.

An NPHIL update disclosed that there are two hundred and fifty-four active cases taking treatment while there is no new death as the total number of deaths stands at thirty-three.

Nine-hundred-eighty- eight contacts are being traced.

In a related development, a campaign to ensure the compulsory use of nose masks by citizens and foreign residents is expected to be launched shortly in Monrovia.

The campaign is styled “Masks For All”.

It is being spearheaded by the National Public Health Institute of Liberia in collaboration with the Ministry of Transport and the Joint Security.

In an ELBC interview Wednesday, June 17, 2020, NPHIL Deputy Director General for Technical Services, Jane McCauley, said:” Health Authorities have observed that citizens are no longer wearing nose masks, and that the increase in the number of coronavirus cases can be attributed to the refusal of citizens to wear nose masks across the Country.”

According to her, members of the Joint Security will enforce the use of nose masks and other facial protective gears.

Meanwhile, Information Minister, Eugene Nagbe, says:” The involvement of traditional leaders is critical to the fight against the coronavirus in the Country.”

Minister Nagbe said:” It would require the collective effort of community and traditional leaders for Government to succeed in the fight against Covid-19.”

Minister Nagbe made the remarks Wednesday, June 17, 2020, in Kakata, Margibi County, at a one day roundtable dialogue organized by the Carter Center aimed at strengthening the capacity of traditional leaders to adhere to various health protocols.

The Information Minister urged the participants to relay the message of Covid-19 and its preventive measures upon their return to their various communities.

Meanwhile, Minister Nagbe said the Risk Communication Pillar which he heads under the Incident Management System (IMS) is intensifying awareness about the existence of the virus and its rapid infection.