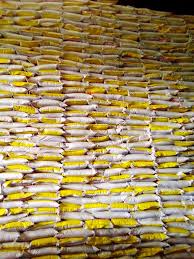 MONROVIA, LIBERIA-The Liberian Government has announced the arrival of eighteen metric tons of rice into the Country via the Free port of Monrovia.

The Government also announced that a vessel, currently on the waters of Guinea, is bringing several metric tons of rice imported by the United Commodities Incorporated (UCI).

Inspector Davis said:” The eighteen metric tons of rice arrived on board the SWART Vessel.”

Madam Davis maintained that there is no shortage of rice in the Country, and accused rice sellers of hoarding the commodity to create artificial shortage. Meanwhile, two persons have been arrested and undergoing investigation by Commerce Authorities for hiking the price of rice on the Liberian market