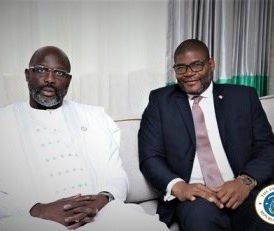 In the letter of resignation, Minister Findley thanked President Weah for affording him the opportunity to serve his country as Foreign Affairs Minister.

According to an Executive Mansion statement, Minister Findley has also reaffirmed his commitment to the governing coalition despite leaving his top ministerial position.

His resignation comes after he accepted to contest the upcoming mid-term senatorial elections in Grand Bassa County.

In his communication, Minister Findley craved the support of President Weah as he seeks to re-enter the Liberian Senate come December this year.

“My service in the Coalition administration has afforded me the opportunity to work with some very remarkable personalities internationally, locally and within the Ministry of Foreign Affairs. And I am very grateful. I owe you a debt of gratitude for affording me the opportunity to serve and implement your administration’s agenda,” the former Foreign Minister further told President Weah.

“You can rest assured, Mr. President, of my unflinching support as my leaving the Ministry of Foreign Affairs does not suggest me leaving my commitment to the Coalition for Democratic Change. I also count on your support as I embark on this journey of seeking to re-enter the Liberian Senate” the former Senate Protempt added in a communication to the Liberian Leader.

Mr. Findley, who was confirmed by the Liberian Senate on February 22, 2018 following his appointment by President Weah, was recently petitioned by the elders and people of Grand Bassa County to contest the senatorial seat of the county during the forthcoming mid-term elections in December.