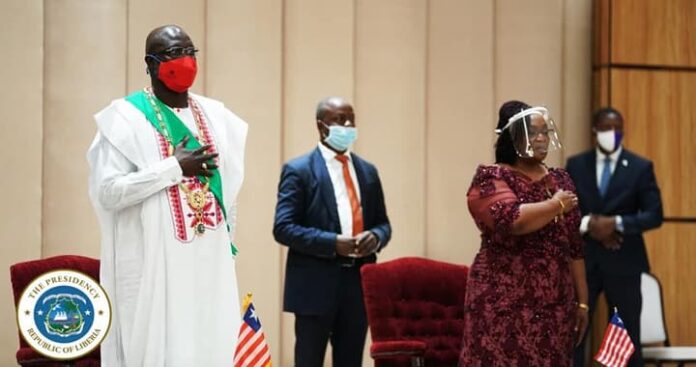 President George Manneh Weah has acknowledged the crippling impact the coronavirus pandemic is having on the country and its people.

President Weah said the Pandemic is severely crippling livelihoods and the national economy.

“Like the rest of the world, Liberia remains heavily burdened by the devastating effects of the virus for months” the President said in his special Independence Day Speech delivered on Monday July 27.

At the event commemorating Liberia’s 173rd independence, President Weah said “for several months now the coronavirus plague continues to emit its venomous toxins, causing the destruction to the lives of millions of people across the globe”.

“Liberia has not been spared by the damaging impact of deadly disease,” the Chief Executive said. He however indicated the country was in a much better position in terms of number of infections and deaths because of its Ebola experience, as well as professional handling of the situation.

The Liberian leader, who recounted precautionary and preventive measures earlier deployed by the government to stamp out the virus, said further, “Our economy and our people are still severely affected by the negative consequences of the pandemic.”

“Not surprisingly, it has caused drastic downturn in business activities and a consequent decline in revenue generation, as well as resulted in food shortages, rising inflation and negative projections in GPD growth,” President Weah pointed out.

The President observed that the country is likely to endure the impact of the virus for a protracted period of time, but stressed that there was light at the end of the tunnel if Liberians came together in unison to fight the virus.

The President said recommendations proffered by Orator Dunbar oration bolstered hope that Liberia can conquer the virus once united, focused, disciplined and determined.

President Weah reiterated his appeal to the people of Liberia to put aside their differences, whether political, social, and religious, in order to overcome the virus.

At the same time, the Liberian Chief Executive promised his government’s willingness and readiness to go extra miles in heightening its responsibility to the people and to bring to an end the COVID-19 chapter.

President Weah said there is a renewed impetus enabling his administration to uphold commitment towards improving the livelihood of the Liberian people.

The 173rd Independence Day, which was officially celebrated Monday, July 27 because the 26 was on Sunday, is the third observance of the National Day since President Weah assumed power.