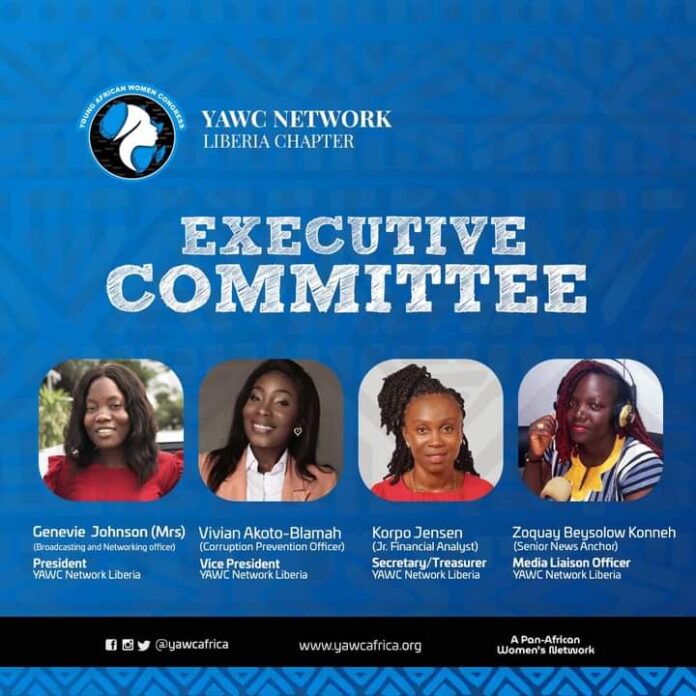 Four Liberian women have been sworn in as chapter Leaders of the Young African Women Congress (YAWC) Liberia Network.

Established in 2016, The Young African Women Congress (YAWC) Network is a fraternity of young women of African descent living in Africa and the diaspora who seek to be empowered and be themselves, change makers for leadership and development on the continent.

The program also began with swearing of the Global President, Miss Jacqueline Nyapendi of Uganda and the Vice President Mrs. Everlyn Oye Lamptey of Ghana.

The virtual ceremony took place on a Zoom platform in the presence of all the seven Chapter Presidents and their Executive bodies, specifically, Liberia, Ghana, Sierra Leone, Nigeria, Cameroon, Uganda and Kenya.

Speaking in his welcoming remarks, the Chair of the Council and Executive Director of ExLA Group, Mr. Daniel Osei Tuffuor, stressed on the main agenda of the Network, which is the grassroots mobilization of women at all levels for leadership and development of the continent of Africa.

He expressed hope that they would deliver on their mandate and become a legacy.

The Guest Speaker, Madam Carol Annang, a Board Member of ExLA Group and the Managing Director of Secure Pension Trust, hailed all leaders of the network for taking up a new journey with the organization.

She charged them with the responsibility of looking for the real issues confronting women on the ground and mobilize the needed support beyond perceived boundaries.

For her part, the Global President, Ms. Jacqueline Nyapendi thanked the Council and the Management of ExLA Group for the opportunity given her and her colleagues to serve and help build a stronger Network.