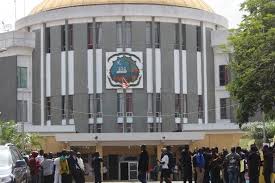 MONROVIA, LIBERIA-The Liberian Senate has concurred with the House of Representatives on the passage of the 2020-2021 National Fiscal Budget.

The budget is in the tone of five-hundred-seventy-million United States Dollars.

The Senate Plenary’s decision followed the passage of the budget by the House of Representatives, and subsequent submission to the Liberian Senate.

Meanwhile, the Liberian Senate has adjourned its Third Session and is expected to resume January, 2021.