Monrovia, Liberia – Culture Ambassador Juli Endee on Sunday October 18 treated Liberians and foreign residents, as well as well-wishers to an elaborate Red-Carpet event at the Royal Grand Hotel in Monrovia.

The well-attended event was in commemoration of the 2020 Hollywood and African Prestigious Awards (HAPAwards).

With the main event held virtually in Los Angeles, USA, Amb. Endee added more flavour as a Presenter by organizing an amazing awards dinner, full of music, royalty and entertainment.

Last year, the Liberia Crusaders for Peace Executive Director led a delegation from Liberia at the Awards in Hollywood where she presented and also received the prestigious awards for her excellent works in Liberia, over the years.

The program brought together an array of celebrities and local artists, government officials as well as foreign dignitaries and Diplomats.

Speaking at the action-packed events, Liberia’s Foreign Minister Dee-Maxwell Kemayah called on Liberians at home and abroad to be supportive of development initiatives that will help government achieve its vision of genuine transformation in Liberia.

Ambassador Kemayah said with other countries moving ahead, Liberians should now put their political interests aside and focus on the real issues that are crucial to Liberia’s growth and economic development.

The Foreign Minister described Sunday’s showpiece as not just an event, but a chance to project a positive image of Liberia by connecting the country with the USA based Hollywood and African Prestigious Award (HAPAwards).

He lauded Ambassador Juli Endee for organizing such an amazing program, full of positivity and sense of patriotism.

“I can assure you that as a Ministry, we will be supportive of initiatives such as these. Whatever help you need, just let us know because it is not about you, it is about Liberia” Amb. Dee-Maxwell Saah Kemayah, Sr. assured Madam Endee at the program.

For her part, Culture Ambassador Juli Endee used the Hollywood platform via zoom to encourage Liberians and African Americans to come down and trace their ancestral roots in Africa.

Madam Endee pointed to the investment potential of Africa as a virgin continent in terms of untapped resources, particularly in Liberia.

She also said by coming down to Africa, African Americans will finally identify and trace their roots that will allow them to tap into the African culture. 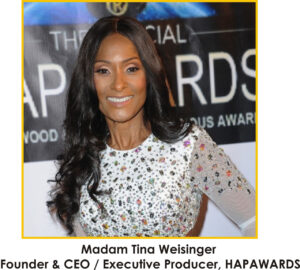 The prestigious HAPAwards was founded by Madam Tina Welsinger who is also the CEO and Executive Producer of the awards. The Vice President / Co-Founder and Producer is Madam Amber Washington.

The Awards also features some renowned celebrities as International Hosts, including Michael Blackson and Zari the Boss Lady.

The Hollywood and African Prestigious Awards (HAPAwards) are prestigious awards for achievements in the film and music industry, and the Honors are awards to recognize outstanding individuals whose professional careers have been marked by extraordinary personal and professional accomplishments.

Honorees and winners are awarded the HAPA trophy.