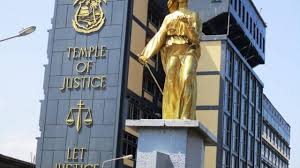 MONROVIA, LIBERIA-Three Liberian ladies along with their male counterpart were Monday, October 20, 2020, detained at the Monrovia Central Prison for allegedly stripping another lady naked, in the Fiamah Community in Sinkor.

Suspects Bernice Norman, Lisa Sherman, Hawa Wilson, and Derick Williams, were arrested Monday by officers of the Monrovia City Court and brought before Judge Ben Banco, who later ordered them detained due to their lawyers’ failure to secure a valid criminal appearance bond.

Victim Romel Massaquio told the Court, that on October 16, of this year, the three suspects reportedly jumped on her and beat which led to her sustaining several pains and injuries and even threatened to kill her.

The victim claimed, that the suspects have attributed their October 16, action against her due to the wideness of her hips.

The victim’s testimony to the court was backed with video evidence where three ladies along with their male counterparts, were seen in the act thus sustaining injuries due to the alleged beating of the victims in that community, with her trousers off.

They were charged for multiple offenses ranging from terroristic threats, menacing, criminal mischief, disordering conduct, and criminal coercion in violation of Chapter 15, Section 15.5, and Chapter 11, Section 11.16 of the New Penal Law of Liberia.

Liberia records no new case of COVID-19 in past two days-Dr. Jallah

Liberia records no new case of COVID-19 in past two days-Dr. Jallah

Liberian Troops, others to participate in War Simulation Training in the United States