Madam Wie said President George Weah is so passionate about the plight of the poor that he has directed the government’s development focus on improving the livelihood of the poor in the country.

The deputy Internal Affairs minister was speaking Wednesday at the dedication water kiosks for sixty four communities in Monrovia and Paynesville.

Over 400 thousand urban slum dwellers in Monrovia and Paynesville are benefiting from a water project sponsored in partnership with the government, by City Alliance.

Speaking at the launch of the project in New Kru Town Wednesday, Minister Wie urged, residents of benefiting communities to take proper ownership of project and use it to improve their lives.

As  National Government under the dynamic leadership of his Excellency George Manneh Weah is making tremendous efforts in infrastructure development, road connectivity and improve access to basic social services most especially in urban Poor areas or informal settlements across the country, we at the Ministry of  Internal Affairs want  to appreciate our International Partners, Cities Alliance,  Comic Relief, UNOPS, Slum Dwellers International, Water Aid and Unicef,  for their financial and technical support. We also want to appreciate our Local Authorities, Liberia Water and Sewer Corporation, Wash Commission, Environmental Protection Agency, Ministry of Public Works, Young Men Christian Association, Federation of Liberian Urban Poor Savers, the Community Dwellers, office of Representative Dixon Seboe, the media and other lines Ministries, Agencies and Commissions for the level of cooperation, coordination and support to the Liberia Country Program.

The Cities Alliance global partnership aims to improve the lives of at least 400,000 slum dwellers and working poor by empowering local people and enabling them to create lasting change in their communities in partnership with National Government, Local Government, Community and the private sector.

Emerging from the combined ravages of brutal civil war, the ebola virus and now the corona virus, Liberians embody the concept of resilience despite the burden of many developmental and other challenges.

There  is growing recognition that successful community driven interventions support economic vibrancy at the community level,  create inclusive city growth and promote equitable access to public goods and services for all residents  because such interventions foster a strong sense of ownership. 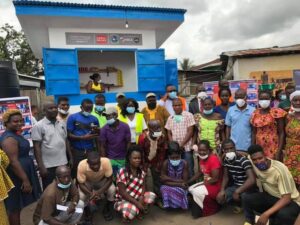 The Community Upgrading Funds is a community driven development initiative that provides money for small infrastructure projects selected by the communities themselves.  The projects enable the urban poor to make measurable impacts in Communities by improving basic social and physical infrastructure, enhancing their quality of life and creating better work environment in informal settlements.  Let us keep praying to God for mama Liberia and working in the interest of our people and country.