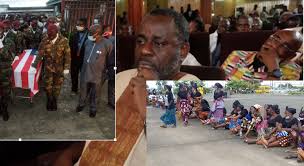 MONROVIA, LIBERIA-The remains of fallen Public Works Minister, Mobutu Nyenpan, is lying in State at the Rotunda of the Capitol in Monrovia.

Prior to his death, the Public Works Minister also represented Sinoe County in the 52nd and 53rd National Legislature.

Meanwhile, funeral rites over the fallen Statesman will be held at the Cathedral Church preceding burial in Brewerville, outside Monrovia.