Monrovia, Liberia – The Presidential Street Light project has extended to the Johnsonville road following ground breaking by Chris Electrical Corporation, a Liberian company sub contracted to carry out the installation.

Workers of the company were Thursday seen at the project site digging the pedestals for the planting of light poles.

Mr. Sannoh said street lights will also being installed from the Johnsonville Turning Point to the Pipeline, connecting the Red Light Market. 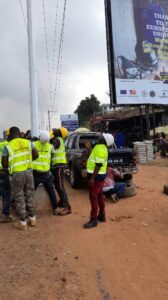 Speaking in an ELBC interview in Johnsonville Thursday, Sannoh said the move is in line with the President’s quest to install street lights along all the asphalt pavements in Monrovia and its environs.

“We move in line with the President’s mandate. Our President wants the installation of street lights along all asphalt pavements and we are committed to doing that. As you can see, our team is working hard digging the pedestals ahead of the installation from Johnsonville Dry Rice Market to the Turning Point and later from the Johnsonville Turning Point to the Pipe Line, connecting the Red Light Market” Victor Sannoh told ELBC at the project site in Johnsonville.

CEC Workers at work along the Johnsonville Road

Chris Electrical Corporation has also fast rack other installations along the Tubman Boulevard, Broad Street and Bushrod Island up to the Free Port of Monrovia.

The company was subcontracted by Quality Group of Companies to help implement the Presidential Street Light Project.

Ministry of Gender and Partners Celebrate Day of...