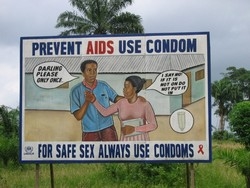 MONROVIA, LIBERIA – The National AIDS Commission of Liberia and UNAIDS are strongly warning against the discrimination of people living with HIV/Aids in the Country.

The National AIDS Commission Chairperson, Theodosia Slewion Kolee and UNAIDS Country Director, Pepukai Chikukwu said people living with HIV must be given the rights to employment and any form of services in the Country.

Madams Kolee and Chikukwu said there are instances where people living with HIV have been forced to do HIV test while seeking employments.

They noted that the intent by employers to request test for people living with HIV while seeking employment amounts to discrimination.

Speaking Monday on the occasion marking Zero Stigma and discrimination Day, Madam Kolee and Chikukwu, said an estimated 35-thousand people are living with HIV in Liberia and disclosed that the virus now has treatment.

More than 1.9 million children across Liber to be vaccinated for Typhoid in March

No Confirmed Case of Ebola in Liberia….Health Minister Clarifies