BRAC Liberia Country Office, alongside BRAC Bangladesh and BRAC International, has held a grand celebration of the 49th anniversary of BRAC and its founder, Abed Bhai on the 24th March 2021.

The event accompanied joyful moments and deep reflections about the impactful work achieved by BRAC as an institution, which started as a small relief and rehabilitation initiative in North-Eastern Bangladesh by its Founder Sir Fazle Hasan Abed in 1972. With the initial aim of addressing the immediate needs of people living in poverty and social inequalities, BRAC as an institution has evolved and now exists in 11 countries in Africa and Asia. It has built an enviable reputation towards achieving a world that is free from exploitation into one that can guarantee equal rights and opportunity for all to achieve their potential.

The staff of 30 BRAC Liberia branch offices observed this great day by sharing powerful tributes, drawing from the indelibly inspirational life of the Founder Abed. “As employees of BRAC, we are proud that the sacrifice which our Founder Abed Bhai made by investing in the vision of BRAC continues to be felt by a significant portion of the world’s population.  As a leader, Abed stood for and lived by the firm principles of humanity – the footsteps of which we as BRAC staff take pride in copying from” said Khaled Morshed, the Chief Executive Officer, BRAC Liberia Microfinance.

The subsequent order of tributes by staff captured Abed as a role model whose selflessness inspires every BRAC staff each day.

To end the day’s celebration, BRAC Liberia connected to the BRAC global Webinar meeting in honour of the day and in celebrating staff whose incredible works have impacted communities with the Sir Fazle Hasan Abed Awards. The award is a motivating gesture for BRAC staff to continue on the selfless path of reaching more lives through BRAC’s programmes. 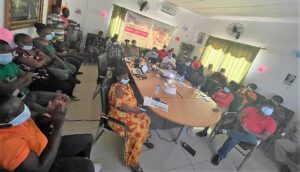 According to the Executive Director of BRAC International, Dr Muhammad Musa, BRAC is true towards demonstrating its core values of INTEGRITY, INNOVATION, INCLUSIVENESS AND EFFECTIVENESS. “At BRAC, we will continue to essentially heed our value in ending poverty and supporting women’s empowerment through our financial scheme to help people at the bottom of the pyramid. I am optimistic that we will continue to follow BRAC values.

To date, BRAC has reached approximately 150 million people around the world through its Health, Agricultural, Ultra Poor Graduation, Youth Empowerment and Microfinance programmes. In Liberia, BRAC has shown wide impact through diverse programmes in Microfinance, Education, Youth Empowerment, Health, Ultra-Poor Graduation and Agriculture, Food Security and Livelihood. BRAC Liberia has extended to the southeastern part of Liberia which is often a hard-to-reach territory.

BRAC started as a limited relief operation in 1972 in a remote village in Bangladesh and has grown to become the largest development organisation in the world impacting the lives of 125 million people. BRAC uses a holistic approach to development engaging a wide range of tools to promote inclusion such as microfinance, health and nutrition, education, youth, agriculture and food security, research, community empowerment, disaster management and climate change, ultra-poor graduation, social enterprises, water, sanitation and hygiene, poultry and livestock. BRAC was ranked the number 1 NGO in the world in 2020, for the five years in a row, by the Geneva-based organization, NGO Advisor.

BRAC Liberia has been working and implementing programmes in Liberia since 2008. Its current programmes are Education, Youth Empowerment, Health, Ultra-Poor Graduation and Agriculture, Food Security and Livelihood and Microfinance. It currently operates in 30 branches across 10 counties in Liberia.