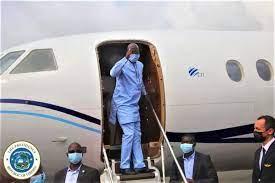 MONROVIA, LIBERIA – The Executive Mansion says President George Weah’s ongoing third-leg County tour will be suspended for a day as the President will be attending a program in neighboring Sierra Leone.

Deputy Presidential Press Secretary Smith Toby said the President’s pending tour to Rivercess and Sinoe Counties will be affected due to his trip to that Country.

Mr. Toby said President Weah will however tour Grand Bassa County from the 21st to the 26th of April before leaving for Sierra Leone.

In an ELBC interview Tuesday, Mr. Toby said, the President will return from Sierra Leone on the 29th to continue his tour in the remaining two Counties.

President Weah is currently in Margibi County in continuation of his ongoing county tour.