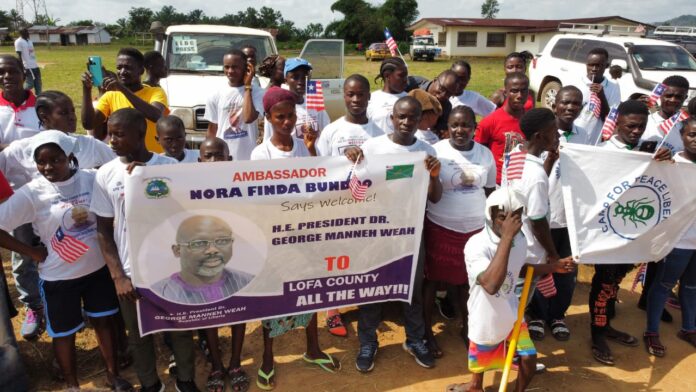 Monrovia, Liberia – President George Weah has described himself as a true son of Lofa County with a promise of massive development initiatives in the county.

President Weah said contrary to some perception in the public, he is a son of Lofa County, noting that such will be manifested with his development interventions after the county tour.

The Liberian leader was speaking Thursday at a Town Hall Meeting in Salayee District, at the start of his Citizens’ engagement tour of Lofa County.

He promised to work with the Legislative Caucus and other key stakeholders in pushing for the needed development interventions in the county.

President Weah also told citizens of Lofa that he and Vice President Jewel Howard Taylor are on good terms and are working together in the implementation of the Government’s Pro-Poor Economic Development Agenda.

Vice President Taylor and several other dignitaries are accompanying President Weah on his tour of Lofa County for the next five days.

Earlier during the day, the Liberian Chief Executive and entourage were given a momentous welcome in Beyan Town, Salayea District by local authorities and traditional leaders of Lofa County.