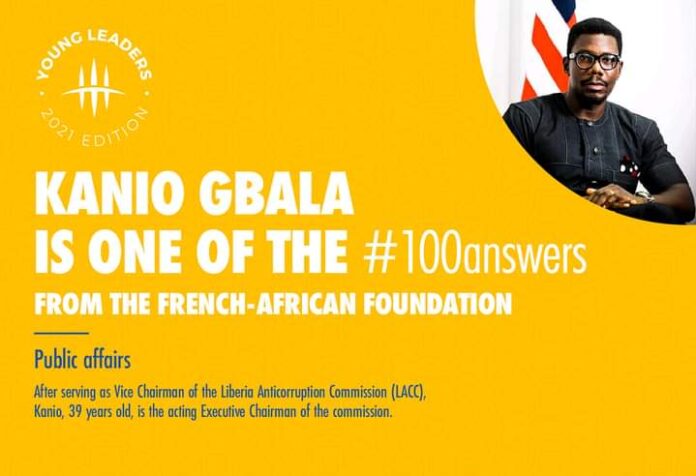 Monrovia, Liberia – The Vice-Chair of the Liberia Anti-Corruption Cllr. Kanio Bai Gbala has been selected as a 2021 France-Africa Young Leader.

The 39-year-old was selected following months of a very competitive vetting process that featured over three thousand (3000) applications from serious young leaders across Africa and the global space.

The program seeks to build more resilient ties between France and Africa by tasking the next generation of African leaders to address the most vexing problems facing the Continent and France through innovative thinking and collective action.

In October, Cllr. Kanio Bai Gbala will join 100 other young leaders in Paris as guests of the French-African Foundation and the French Government.

The gathering will discuss and seek answers to some of the challenges faced by French-Africa relations.

Reacting to his selection, Cllr. Gbala wrote on social media “I’m honored and very excited to share that after a very grueling selection process which spanned months and featured over 3000 solid applications from serious young leaders across Africa and the global space, I have been selected as a 2021 France-Africa Young Leader. Of course, we will be flying the Liberian flag very high”.