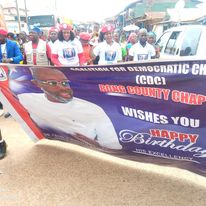 MONROVIA, LIBERIA- Celebrations are ongoing across the country in commemoration of the birth anniversary of President George Weah.

The Liberian Leader turned fifty five Friday October 1. In addition to activities in the various counties, several communities across Monrovia have mobilized to celebrate the President.

The PHP Community in Central Monrovia, Westpoint, Clara Town and New Kru Town are all having appropriate programs befitting the day.

The ruling Coalition for Democratic Change is also having a birthday commemorative rally in honor of the Liberian Leader at the party’s headquarters in Congo Town.

Earlier Friday, October 1, 2021, President George Weah received hundreds of people who had gone at his Rehab Residence in Paynesville to extend their best wishes on his birthday.

Many Liberians on a special ELBC phone-in program Friday said the achievements of President Weah have made his birthday worthy of the ongoing festivities.

Some even suggested that a law be passed to make the President’s birthday a national Holiday.

As part of the celebration the 55th birth anniversary of the President, the outpour of messages of love continue to flood in the social media.

Madam Taylor said it is her fervent prayer that God continue to guide President Weah as they work together steering the affairs of Liberia to a nobler destiny.

Mayor Koigee described President Weah as the oxygen and engine driving a great revolution toward the full emancipation of the people.

The Ministry of Gender, Children & Social Protection was particularly full of praise for President Weah for his ardent commitment in championing the rights of women, girls, children and other vulnerable people.