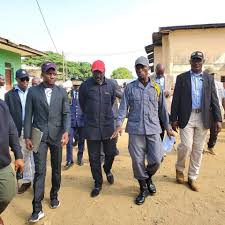 The pardoned inmates came from the Monrovia, Kakata and Sanniquellie Central Prisons and the National Palace of Corrections in Zwedru, Grand Gedeh County.

According to reports, the clemency was extended by the President based on good behavior as advised by the Ministry of Justice, when he visited the Monrovia Central Prison.

The decision is in keeping with Article 59 of the Liberian Constitution, which states that “The President may remit any public forfeiture and penalties, suspend any fines and sentences, Grant reprieves and pardons, and restore civil rights after conviction for all public offenses, except impeachment.”

President Weah called on the pardoned inmates to be positive in their actions and to contribute to the development of the Country.

He said: “I pardoned you today because of the good behavior exhibited while in prison. Don’t go back to what brought you here,”

President Weah called on the Attorney General of the Republic of Liberia to work with the Judiciary to ensure that pre-trial detainees are accorded speedy trial.

The fifty-four  pardoned inmates had varying conditions that qualified them for pardon, including those critically ill or of old age, misdemeanor, served more than half of their sentences, served at least ten years for capital offense for life sentences.