Monrovia, Liberia – The Nmah Clarke Family Humanitarian Aid continues to put smiles on the faces of children, youth and the elderly across various underprivileged communities in Liberia.

The recent goodwill and outreach activities of the NCFHA have not only brought relief to people across communities in Monrovia and its environs, but also lifted their spirit amid challenging economic times caused by the coronavirus pandemic.

A fortnight ago, over 53 persons including children and adults benefited from basic computer training after graduating from a program provided by the Logan Town Recreation Center under the sponsorship of the Nmah Clarke Family Humanitarian Aid Incorporated.

The training ran from August last year to February this year but graduation could not take place due to the covid-19 social distancing guidelines and health protocols put in place by the Liberian Government.

The computer training program is geared toward helping young people procure talents in Computer, develop and improve talents of young Liberians and prepare them for job opportunities.

Its mission is to achieve employability for young people, prepare them to solve computer related problems and master the internet.

The graduation was followed by a day – long distribution of food and other assorted items to the elderly people in Logan Town, Bushrod Island.

The distribution, according to NCFHA Chief Executive Officer, Tuwroh Nmah Clarke, was her way of identifying with the elderly in the community to mark her birthday and also in commemoration of Liberia’s National Flay Day Holiday.

In addition to sufficient cooked food takeaways, each of the over three hundred (300) elderly people walked away with a bag of rice in delight.

It was a day to remember for the elderly who turned out for their packages but many of them who spoke with the Liberia Broadcasting System said they have gotten accustomed to humanitarian gestures from Mrs Tuwroh Nmah Clarke and her Husband, Delano Clarke through the Nmah Clarke Family Humanitarian Aid Incorporated.

72 year old Mary Kaye could not hide her joy when taking on the microphone after receiving her packages. “My son, I’m too happy. I don’t have plenty things to say but to tell this woman thank you. She is always doing it for us. Let God bless her” Madam Kaye.

Her sentiments as you would expect, were echoed by another woman Kpannah Wula who prayed for God’s continuous protection upon the Nmah-Clarke Family given their good work in the community. 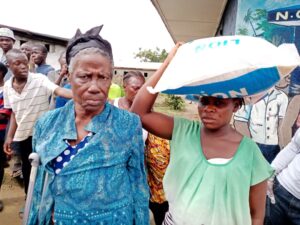 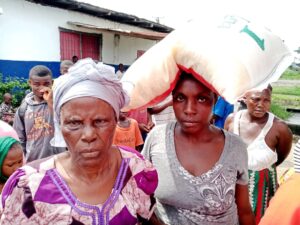 Speaking earlier before the kick-off of the distribution exercise, CEO Tuwroh Nmah-Clarke thanked everyone for coming, noting that the gesture was the will of God.

“I want to thank you all for coming. This (the distribution) is not me, it is not my husband, it is God” Madam Tuwroh Nmah-Clarke told the cheerful crowd at the Logan Town Recreation Center.

The Nmah Clarke Family Humanitarian Aid has also recommenced its feeding program which was suspended due to the Covid-19 pandemic.

“We feed 150 to 200 children. We’re also including the elderly in the feeding program every Saturday” said Madam Clarke.

At the same time, the organization has a new program, named and styled ‘BRIDGE’ which stands for Build, Resource, Integrity, Design, Growth, Environment.

The initiative, according to Madam Nmah-Clarke, will be guided on the principles of structuring the minds of the children, between the ages of 5 to 12 years old. 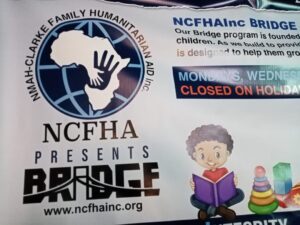 The Nmah-Clarke Family Humanitarian Aid, Incorporated is a US-based Liberian Charity Organization founded by Tuwroh Nmah-Clarke and her husband Delano Clarke in 2016 with the aim of helping address issues confronting humanity, especially the underprivileged communities in Liberia.