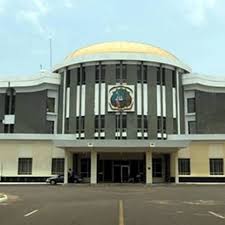 MONROVIA, LIBERIA – The Liberian Senate has clarified that the impeachment of former Associate Justice, Kabineh Ja’nah, was lawful.

The Senate’s clarification is in reaction to diverse public concerns following the ruling by the ECOWAS Court of Justice in the case Cllr. Kabineh Ja’nah the Republic Liberia.

Recently, the ECOWAS Court ruled in favor of Cllr. Ja’nah in the case.

But, the Senate has insisted that Cllr. Ja’nah was accorded due-process during the impeachment proceeding, including his rights to lawyer.

In a statement issued Tuesday,November 17, 2020, the Senate said it did not violate any provision of the 1986 Constitution or any other law of Liberia, including its standing rules to impeach Cllr. Ja’nah.

The Senate reminded all Liberians that Cllr. Ja’nah was found guilty of misconduct and gross breach of duty and that its decision was void of sentiments.

Meanwhile, the Leaderships of both Houses are expected to jointly issue an advisory to the Executive Branch of Government regarding the verdict of the ECOWAS Court.