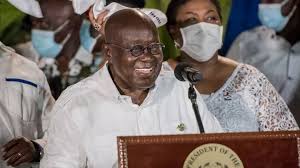 President Akufo-Addo was declared winner of the Presidential by the Electoral Commission against his main rival, former President John Dramani Mahama.

A Foreign Ministry release issued Friday, December 11, 2020, quotes President Weah as expressing optimism that the cordial ties of friendship and cooperation between Liberia and Ghana will be further strengthened, in the spirit of African solidarity.

President Weah stressed that the re-election of President Akufo-Addo manifests the confidence reposed in his ability to steer the affairs of the Country.

The Liberian Leader also assured his Ghanaian Counterpart of greater cooperation in trade and commerce, and other areas of partnership to foster developments in both countries.