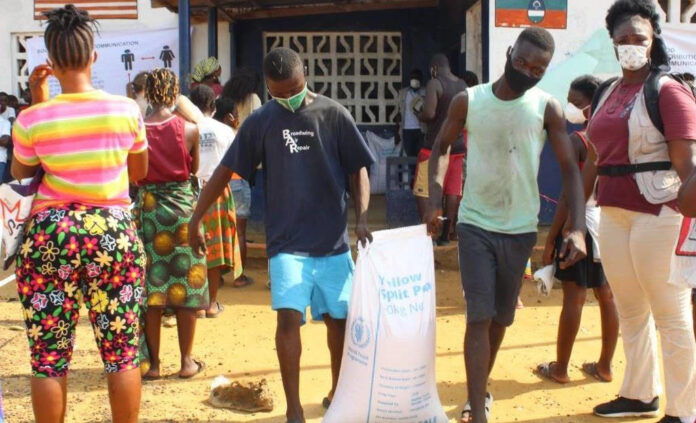 The food rations – comprising 50 kg of rice, one gallon of vegetable oil, and 28 cups of beans – are being provided by the Government of Liberia through the World food Pragramme and partners.

The WFP release said more than 29-thousand households in Margibi’s four districts including (Gibi, Firestone, Kakata, and Manbakaba) have been enumerated to benefit from the food rations.

World Food Pragramme said the distribution is spearheaded by its NGO partner Volunteers for Sustainable Development in Africa, VOSIEDA.

The release quotes  VOSIEDA Coordinator of  Linus Sarkor as saying, distribution has already been completed in Gibi and Firestone Districts while 60 percent has been obtained for Manbakaba and 6-thousand out of 11-thousand households have been completed in Kakata Districts.

Mr. Sarkor, however, expressed concerns over the “continuous disruption of distribution by some community residents not understanding the selection criteria.

The release quotes Mr. Sarkor as reminding residents of the mandate of the COHFSP, which is intended only for the most vulnerable and not for everybody.

Meanwhile, community residents are expressing happiness and gratitude to the government, WFP, and partners for the food.

According to the release, these beneficiaries, B-Ma Kamara, 32, a mother of three girls in Margibi County, Victoria Gibson, 37; Mary Williams, 40, Famatta Cooper, 33, Otis Kweh, 36; Annie Sackie, 21 and many other beneficiaries welcomed the food support.

First Dialysis Center to be built in Liberia