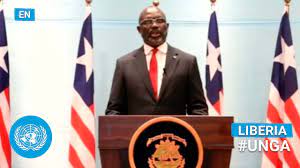 MONROVIA, LIBERIA-President George Weah has informed the world that the Liberian economy has begun showing sig ns of resurgence, despite the negative impact of the Coronavirus.

President Weah said the economic gains are based on the implementation of the Liberian Government’s strategic Post-COVID-19 Recovery Plan.

President Weah said:” Projections for Gross Domestic Product (GDP) is now positive, and is expected to reach for percent in the coming year.”

The Liberian Leader said government has seen a signify cant increase in domestic revenue for the first time in more than a decade, through the implementation of difficult microeconomic reforms.

In the area of agriculture, the Liberian Leader said the Liberian Government is expected to launch agriculture promotion projects, which will increase production through new entrepreneurship opportunities, innovations, and safe farming techniques.

President George Weah told the UN General Assembly that his government has discovered investment in roads, energy and ports as key priority areas.

Meanwhile, the Liberian Leader has advocated for meaningful partnerships with the United States and the rest of the world, to remain on the journey of sustainable development.

He said those partnerships are essential to developing a collective action plan against climate change.

President Weah said a further reflection on the theme for this year‘s UN General Assembly highlights the need to respond to the needs of the planet.

He said the reality of climate change facing the world demands urgent attention and collective of all national and international actors.

President Weah then reaffirmed the Liberian Government’s commitment to maintain the Country’s forests for the future.

President Weah said the method is one of the major recommendations in the Truth and Reconciliation Commission report.

The Liberian Leader stressed the importance of agreeing on a process that would bring closure to the wounds of war victims, and guarantee the sustenance of peace, stability, justice, and national reconciliation.

For some time now, some opposition figures have led a campaign for the establishment of War and Economic Crimes Court in Liberia.

However, the Liberian Leader has told the world body that his government has already begun consultations with stakeholders, including the Legislature, Judiciary and strategic international partners to choose a path of resolving issues caused by the civil war.

President George Weah expressed the hope that at the end of the ongoing consultative process, a national consensus will emerge to determine a pathway.