Ministry of Gender and Partners Celebrate Day of the African Child

The Ministry of Gender and Social Protection in collaboration with the Liberia National Children Parliament and other partners have celebrated the Day of the African Child.

The Partners include the United Nations, Kids Educational Engagement Project, Plan Liberia, Save the Children and SOS Children Villages amongst others.

The day of the African child is observed every year June 16, to commemorate the death of hundreds of school children massacred in Soweto, South Africa in June 1976.

It is also aimed at reflecting on progress made towards children’s rights as well as barriers they continue to face across the world.

The program which took place at the Ellen Johnson-Sirleaf Ministerial Complex, began with a parade from the Ministry of Health in Oldest Congo Town.

The celebration brought together stakeholders including government officials, students, local and international partners.

It was held under the theme:” creating a space for children to speak up against harmful practices affecting their well-being.”

Speaking at the ceremony Thursday, Education Minister, Ansu Sonii, called on parents to ensure that their children are protected and educated for a brighter future.

Minister Sonii said children are not general commodities to be purchased at any time therefore; those bearing children should be prepared to shoulder their responsibilities.

“The goodness of any society starts from the home- equally, society can also be rotten from the home. So, those who wishing for children should provide the needed support and care.”

For her part, Deputy Gender Minister for Children and Social Protection, Lydia Sherman, assured the children of government’s commitment to protecting and creating an enabling environment for children across the country.

The Deputy Minister said government is cognizant that children are the future leaders and their protection is a paramount concern.

She noted that government and partners are doing everything possible to protect children against all forms of violence.

“The Ministry of Gender, Children and Social Protection continues to lobby for Legislations and policies to ensure that children are given their rights to education, health, justice and safety.”

The deputy minister called on the youth populace to work along with stakeholders and activists to ensure that their rights are protected.

“However, you all are your own advocates, you all have a voice. So, whenever you see that government or civil society organizations are not doing their job, it is your right to talk about it and hold our feet to the fire to ensure that we do what we are mandated to do.” 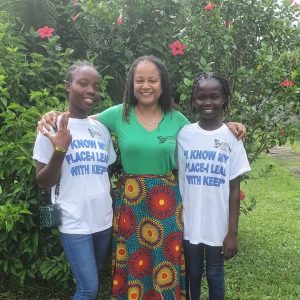 The deputy Gender minister also named the provision of free primary education and effort being applied to eradicate FGM as measures taken to provide an enabling environment for children.

At the same time, the Speaker of the Children Parliament of Liberia, Joel Gray, wants government implement universal laws seeking the well-being of children.

He added that the full implementation of the laws will create an enabling environment for all children.

“We are calling on the government of Liberia to create a program that will help to eliminate issues that affect girl children across the country.”

Gray maintained that harmful practices and domestic violence meted against children need to be addressed to create a favorable living condition for them.

He also said children living with disabilities must be given equal opportunity in terms of education and job provision.

This year celebration of the Day of the African Child was supported by Plan Liberia, Kids Educational Engagement Project and Save the Children as well as the United Nations among others.