Tunisian club Esperance has been declared African Champions League winners after opponents Wydad Casablanca were found guilty of abandoning the second leg of the final. 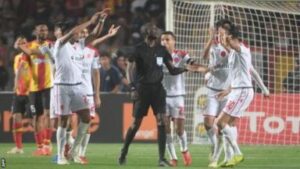 This reverses an earlier decision by the Confederation of African Football’s (Caf) executive committee to order a replay of the second leg.

Wydad left the pitch after an equaliser they scored was disallowed by VAR.

Esperance were leading 1-0 in the second leg at the time and 2-1 overall.

The 1-1 draw from the first leg in Morocco stands.

Both clubs had appealed to the Court of Arbitration for Sport (Cas), which last week found that the Caf executive committee’s decision was wrong and ordered the case to be heard by Caf’s disciplinary committee.

Caf ruled Moroccan side Wydad is considered to have lost the second leg, handing Esperance the trophy.

Esperance were handed a $50,000 fine for use of flares and the throwing of missiles by their supporters.

They were also ordered to play their next two matches behind closed doors for excessive use of smoke and firecrackers, though that punishment has been suspended for 12 months provided they do not commit a similar offence in that time.

Esperance president Mohamed Meddeb was fined $20,000 (£16,400) and given an official warning for unsporting behavior towards Caf president Ahmad Ahmad.

Tokyo 2020 Olympics: With one year to go what are the key stories to watch?

Artificial turf to be installed at SKD Stadium...