The Liberian leader began the tour by inspecting the Gbengba Town, VOA Road Project being implemented by the East China Company.

President Weah made the disclosure when he announced the resumption of nation-wide road projects Thursday, January 9, 2020 while touring the Montserrado County project. 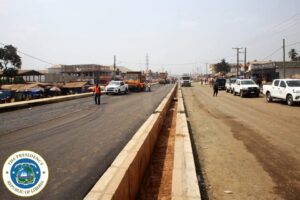 Section of the Paynesville Red-Light Road under construction

Addressing residents of the community, President Weah, assured them that in 2020, government has placed emphasis on the completion of unfinished projects.

The Liberian Chief Executive, reiterated that road connectivity will be a key priority under his administration.

In his remarks, Public Works Minister, Mobutu Nyenpan, said the ministry is in close partnership with the construction companies to ensure quality works on the roads.

Meanwhile the inhabitants of Lower Nimba County are appealing to President Weah to prioritize road connectivity in the county. The people of Nimba also emphasized that the connection of roads remain a major challenge for free movement of residents and commercial goods and services especially during rainy season.

According to ELBC Lower Nimba County Correspondent, Fred Yeegbeh, the people are finding it difficult to carry out agriculture activities and the lack of healthcare are among some of the hindrances due to bad roads in the areas. 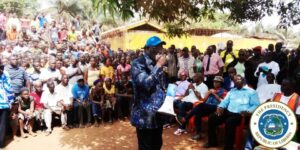 President Weah addressing huge number of citizens who turn up on the tour of the road projects.

The people made special reference to the construction of the Ganta-Zwedru Road linking Nimba and Zwedru City, Grand Gedeh County.

Varflay Kamara has over four years of practical Journalism experience from Radio Gbarnga in Gbarnga, Bong County, Renaissance Communications Incorporated (Truth FM/Real TV), to the Liberia Broadcasting System. Reporter Kamara is our Executive Mansion Bureau Chief. He served as Legislative Reporter from 2017 to 2018. He is an African Journalism Fellow for United Bank of Africa. Varflay is a 2019 trainee of the Nigerian Meteorological Training Institute. Varflay Kamara studies at the United Methodist University in Monrovia.

The Collaborating Political Parties poses no threat to...