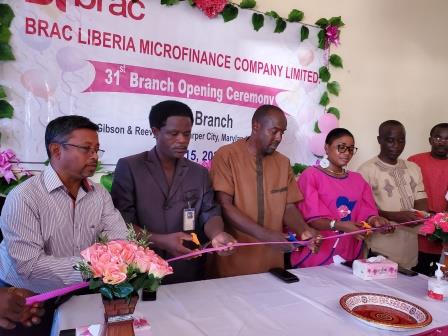 Deputizing the Executive Governor of the Central Bank of Liberia (CBL), an Assistant Director at the CBL, Abdullai Molley officially inaugurated the new branch.

Mr. Molley,  said, “BRAC Liberia is a contributing partner to the Central Bank of Liberia and has performed well among 17 microfinance institutions in Liberia”. “It is very challenging to bring financial services in this part of the country because of the distance. The Government has taken favourable policies to encourage microfinance institutions like BRAC to promote financial inclusion in Liberia”, he added.

Director Molley, said “Central Bank of Liberia remains committed to working with BRAC because their intent is to boost the economy of the country through women empowerment”.

The cutting of ribbon was performed by Maryland County Superintendent, Goerge A Prowd, at the ceremony held at the new office premises on Gibson Street, on April 15, 2021, in Maryland witnessed by Hans A.D. Anderson, Wynston A. Jallah and Selina K. Keagon, Level 1 Bank Examiners, and other dignitaries of the Central Bank of Liberia including the Mayor of Harper Hon. Ellen Blessing Howe.

BRAC Liberia is the largest microfinance provider in the country, transforming the lives of its clients with access to finance, as the opening of this brings the second microfinance branch of BRAC in Maryland County. BRAC Liberia Microfinance Company Limited (BLMCL) and started operations as a separate company from the BRAC NGO in Liberia in 2008.

Over the years it has grown to be the largest microfinance institution in the country by the number of clients. BLMCL’s mission is to provide a range of financial services responsibly to people at the bottom of the pyramid, especially women living in poverty in rural and hard-to-reach areas, to create self-employment opportunities, build financial resilience, and promote women’s entrepreneurial spirit by empowering them economically.

In alignment with its mission, BRAC will provide loans to populations living in poverty, especially women of Harper to invest and grow their businesses. By doing this, BRAC will fulfill a critical gap by taking access to finance to a community who do not have any other alternative available in the region. In the new branch, BRAC will offer its group-based microloans provided exclusively to women, and small enterprise loans for both men and women entrepreneurs. BLMCL also offers loans for job holders in 24 other branches of the country.

The President of the William VS Tubman University, Dr. Elloit Wilson lauded BRAC for the initiative while at the same time asked the organization to take advantage of staffers at the University who are mostly engaged in small businesses. Dr. Wilson also said that Pleebo and Harper should not be the only focus for BRAC but it should also focus on other small towns and villages.

For their parts, Pleebo and Harper City Major, Hon. Willington Kyne and Hon. Ellen Blessing Howard called on the beneficiaries to see the opportunity from BRAC as a way of putting an end to the many challenges women had faced over time. They said women are breadwinners in most homes in Liberia; therefore, their selection should serve as a gateway to other women in the county.

Superintendent George Prawd appreciated BRAC for ‘being committed to words’. “BRAC made a commitment during the 30th opening program in Pleebo to extend its footprint in Harper,” said Superintendent Prawd. “The local authority of the county remains committed in supporting BRAC’s activities because women who are benefiting from BRAC will not just help themselves but their children and their husbands”, he stated.

“We are honored to play a role in transforming the lives of our clients through providing access to finance. We have not only impacted the lives of our clients, but BLMCL has also created many jobs in the country. We now employ 346 Liberians in our company and the majority of our staff are women”, said Khaled Morshed, Chief Executive Officer of BLMCL. “We are grateful to have this opportunity to strengthen our ties with the Government of Liberia and contribute further in improving access to safe and reliable financial services”

BRAC believes that people living in poverty can turn around their own lives given the right opportunities and tools. In its 2020 impact assessment in Liberia using methodology, microfinance clients of BRAC noted improvements in their financial resilience in emergencies, and almost all of them stated that their quality of life has improved since engaging with BRAC.

98% of clients said that their income had improved after engaging with BRAC, and 99% reported that they could not easily access a good alternative, proving the positive impact of BRAC’s services on the lives of its clients.

About 15 women from Harper received loans ranging from LD$15,000, LD$17,000, LD$20,000 and LD$25,000 respectively. Among the borrowers, Susannah Hne and Melvina Wesley appreciated BRAC for selecting them and their colleagues. They also pledged the group’s commitment in meeting the time limit of the loan program.

BRAC Liberia Microfinance Company Limited has 39,562 borrowers, making 97% of them women, and has disbursed over US73 Million in loans since its inception.

The company played an important role to keep up the economic activity in Liberia during the Ebola outbreak and was one of the participating financial institutions for the Post Ebola Reconstruction Project, coordinated jointly by the Central Bank of Liberia and the Ministry of Finance and Development Planning and funded by the World Bank.

Besides its microfinance activities, BRAC NGO has social development programmes since 2008, such as agriculture and food security, health, education, empowerment and livelihood for adolescents and ultra-poor graduation programmes. BRAC has been working actively to support the government’s COVID-19 response since 2019.

BRAC started as a limited relief operation in 1972 in a remote village in Bangladesh and has grown to become the largest development organization in the world impacting the lives of 125 million people.

BRAC uses a holistic approach to development engaging a wide range of tools to promote inclusion such as microfinance, health and nutrition, education, youth, agriculture and food security, research, community empowerment, disaster management and climate change, ultra-poor graduation, social enterprises, water, sanitation and hygiene, poultry and livestock. BRAC was ranked the number 1 NGO in the world in 2020, for the five year in a row, by the Geneva-based organization, NGO Advisor.

BRAC’s first international expansion was into Afghanistan in 2002 and it currently has programmes in 13 countries with a focus on Asia and Africa. BRAC International Microfinance operates in six countries outside of Bangladesh. Each company is registered under the laws of respective countries and uniquely positioned to serve their markets.