During years of civil war in Liberia, the country looked up to some of its African brothers and sisters for rescue and support and one nation that stood out is Ghana, a country that hosted thousands of Liberian Refugees and also helped brokered a peace agreement that ended the civil war.

It is based on this feat that Liberia’s Culture Ambassador Juli Endee has lauded the West African Nation for such commanding solidarity.

Ambassador Endee has hailed the crucial role played by Ghana in restoring lasting peace to Liberia.

She highlighted the involvement of Ghanaian Peacekeepers and civilian personnel in helping the UN Mission restore law and order in the Country.

She expressed the hope that such intervention can be replicated in the arts and tourism industry where Liberia and Ghana can collaborate in the spirit of Pan African Solidarity. 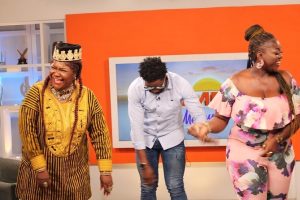 The Liberian Culture Ambassador was speaking Thursday when she appeared as Guest of Joy Prime Morning Show in Accra, Ghana.

Ambassador Endee then expressed excitement being back in Accra, a city that brought Liberian warring factions together to sign a comprehensive peace agreement that practically ended the civil war in 2003.

She lauded the people of Ghana for hosting thousands of Liberian refugees on their soil and giving them the needed support as host communities.

Meanwhile Ambassador Endee is appealing to Liberian Politicians to ensure this year’s general and presidential election is held peacefully.

She wants politicians follow the example of President George Weah who has shown a strong commitment to peace.

She told Ghana’s Joy Prime Network Thursday that utterances from political actors could either move the country forward or send it back to its dark days.

The Culture Ambassador said it is important to engage politicians and election stakeholders into a dialogue about a peaceful, transparent and non-violent election on October this year.