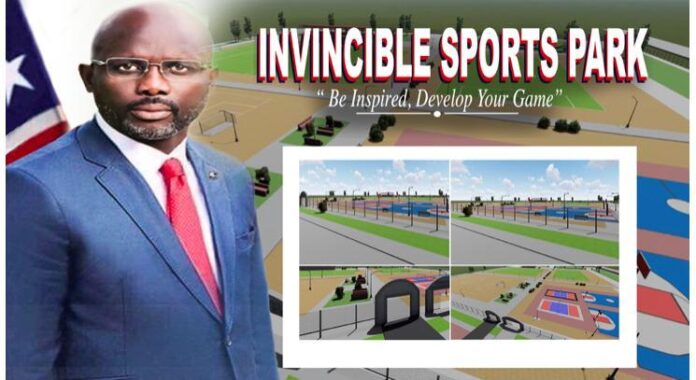 President Weah said the construction of the Sports Park is his own way of giving back to the area where he began his football career before going on to win the World Best title.

The Liberian Leader said the “Invincible Sports Park” is a multi-purpose complex that will contain Basketball, Tennis and Volleyball courts, a gym, play-ground and better sanitary facility.

President Weah said the contractors have been asked to include a prayer facility to the Park to appreciate women who continue to offer prayers to God for lasting peace in the Country.

Speaking at the groundbreaking ceremony Tuesday, February 9, 2021, President Weah said the Park is one of series of Sports Parks to be built by Government.

Meanwhile, President Weah said the construction of the facility is in compliance with the Liberia Civil Aviation Authority safety measures.

Meanwhile, the Project Manager of the Invincible Sports Park construction, Minister of State without Portfolio, Trokon Kpui, says the project is expected to last for at least four months.

Minister Kpui said the construction of the Park is under President Weah’s flagship program, Sports for Development.

According to him, all workers for the project were recruited from the Airfield Sinkor Community as a means of creating jobs for young people.

Minister Trokon Kpui said the project is being done in line with all safety measures of the Liberia Civil Aviation Authority.

Minister Kpui thanked President Weah for paying back to the community where he began his football career, and called on the community dwellers to take ownership of the project.